Hi lovely readers! Today I’m lucky to be on the blog tour for the upcoming children’s books in the new Hopeless Heroes series! The first two books in the series Here Comes Hercules and Hera’s Terrible Trap are being released on 22nd February and today I’m here to share a guest post from the lovely author Stella Tarakson to tell us more about how she got hooked on Greek mythology!

Books that got me hooked – on Greek Mythology.

I’ve been into Greek mythology for as long as I can remember. Everything is just so amazingly bizarre. Where else would you read about a bloke who has a headache, asks to have his skull split open with an axe, and a fully dressed woman pops out? Or a guy who swallows each of his new-born kids whole, until his pissed off wife gives him a boulder to swallow instead? The surviving baby grows up in secret, before coming back to make his dad vomit up his now adult brothers and sisters -forming the prelude to a whopping great war. You couldn’t make this stuff up! I love it!

My parents got me into Greek mythology from a very young age. They were both Greek immigrants, keen for their language and culture to carry on in their new home. I’m so glad. My Greek language skills aren’t as good as they should be (I’m still working on them) but I’ve been able to pass on my love of mythology to my own children. And now – thanks to my wonderful publisher Sweet Cherry – I can spread the love to a wider audience. With my own humorous twists, that is!

Because I’ve always been a book fanatic, I’ve kept several of my childhood mythology books. Some, sadly, were read so often that they didn’t make it. I’m always on the lookout for new old copies, so to speak. Here are some of the ones that managed to survive the ravages of the ages …

The Legend of Ulysses is a retelling of The Odyssey for kids. Reading it now, as an adult, I’m impressed by how skilfully the author handled it. A lot of the original material is totally Adults Only. I wouldn’t mind having a go at something like this myself.

The Hand of Apollo [attached] is for slightly older kids. It’s set in modern-day Turkey, and as my family were Asia Minor Greeks, this is particularly special!

This is the cover of one of my old Greek school books. Translated, the title reads History: Mythical Years. It’s kind of cool to read about Greek mythology in Greek, with the help of a dictionary, that is. I don’t know who scratched doodles onto the plastic cover. It couldn’t have been me, surely …

I love the style of the internal illustrations. These are six of the twelve Olympians. The pictures look like the old vase drawings. Nick Roberts, my illustrator, had a similar idea. All the characters in the book drawn from mythology are depicted in this way, except they’re funny – very clever!

It thrills me to think that the Hopeless Heroes series will help get a new generation of kids into Greek mythology. Who knows? Maybe one far off day, an author will put up an old picture of Here Comes Hercules and say it inspired them to start writing 😊 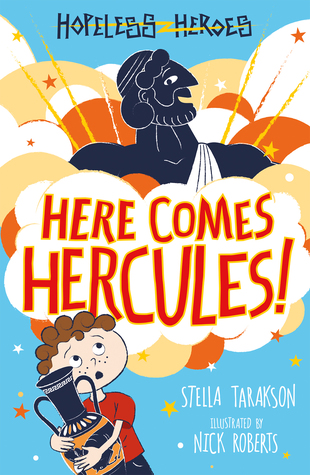 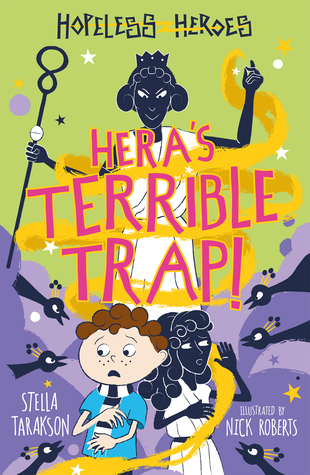 Find out more about these upcoming books by clicking the covers above. They both sound perfect for younger readers and anyone with a budding interest in Greek mythology. I’ll be jumping in as soon as I get a chance!

The blog tour for these books is running right up until mid March so don’t forget to check out the rest of the stops on the tour. If you’re interested, why not take part in the fantastic Hopeless Heroes tag that has been created for the tour? I’ll be posting my answers soon!

A huge thanks to the lovely Jess from Sweet Cherry Publishing for sending me copies of these books and asking me to be on the blog tour. A massive thank you to Stella for her guest post!