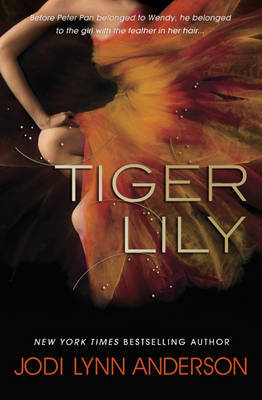 Synopsis: In the forbidden woods of Neverland, Tiger Lily falls under the alluring Peter Pan’s spell. She will risk everything – her family, her future – to be with him. But Tiger Lily soon discovers that the most dangerous enemy can live inside even the most loyal and loving heart. From the New York Times bestselling author comes a magical and bewitching story of the romance between a fearless heroine and the boy who wouldn’t grow up.

Tiger Lily is a retelling of the original Peter Pan story although most of the original story is still there, this gives a different view of the story. In this book, we see the life of Tiger Lily through the eyes of our narrator, Tinker Bell. It did take me a little while to get used to the fact that Tink was the one narrating. It seemed like an odd choice considering she cannot speak to any of the characters, but I now think it was a clever choice by the author as Tink narrating was an effective way to move between characters.

This story is written in a simple yet beautiful style which allows the reader to easily create the imagery of the book in their mind. I loved the Neverland created in this book, although I still love the idea of Neverland existing faraway in the clouds rather than just being an island. It was fun to learn about the different tribes and to focus on Tiger Lily as our main character. This allowed me to learn about the Lost Boys and Peter in a different way, to consider the danger of the mermaids and pirates and to learn about the ways of the Sky Eaters. I really liked how the idea of ageing was explored. With the Neverland natives believing they could catch the ageing disease from the Englanders.

I would have liked to see more action involving the Pirates and Captain Hook as the rivalry between Peter and Hook is key in the original tales. However, given that this is the story of Tiger Lily, I can see why they didn’t play a stronger role. Smee creeped me out in this book. He is murderous villain who becomes obsessed with Tiger Lily and the suspense created around them when Tink can sense he is near was both exciting and nerve-wracking. I desperately did not want Smee to get his hands on Tiger Lily.

There are some much deeper themes and ideas being explored in this book. There is mention/suggestion of rape, physical violence and suicide. These are dealt with in a subtle way but not fully explored. The end of this book left me feeling deeply saddened, but also with a smile on my face. It felt true to life and I think that is what made it painful. Tiger Lily at least got a happy ending, even if it is not the one she first imagined.

I loved Tiger Lily as a character. Learning about her many complex relationships with Tic Tok, the Lost Boys, Peter, Pine Sap and the rest of her tribe kept my interest throughout the book. Tiger Lily is written to be a serious and quiet character, who is also strong, brave, independent and considered by her tribe to be slightly crazy. I loved her development in the story. From a closed young girl, to a more mature, slightly opened young woman. She expresses her feelings for Peter in a non-traditional way and I enjoyed the way new emotions such as love and jealousy were described by Tink as Tiger Lily first experienced them.

“To love someone was not what she had expected. It was like falling from somewhere high up and breaking in half, and only one person having the secret to the puzzle of putting her back together.”

“Sometimes I think that maybe we are just stories. Like we may as well just be words on a page, because we’re only what we’ve done and what we are going to do.”

“She did not believe he could have really gone, because for her, to leave the person you loved was impossible.”

“It turned out that my curiosity did not outweigh my courage after all. Sometimes love means not being able to bear seeing the one you love the way they are, when they’re not what you hoped for.”

On the whole, I really enjoyed this book. I just felt that somehow I wanted a bit more from it. It’s a beautifully written and deeply sad tale about Tiger Lily’s life and her relationship with those around her, but most importantly, Peter.

Have you read Tiger Lily? What did you think?