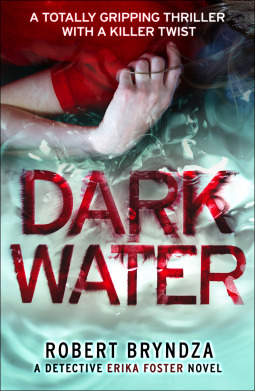 Synopsis: Beneath the water the body sank rapidly. She would lie still and undisturbed for many years but above her on dry land, the nightmare was just beginning.

When Detective Erika Foster receives a tip-off that key evidence for a major narcotics case was stashed in a disused quarry on the outskirts of London, she orders for it to be searched. From the thick sludge the drugs are recovered, but so is the skeleton of a young child.

The remains are quickly identified as seven-year-old Jessica Collins. The missing girl who made headline news twenty-six years ago.

As Erika tries to piece together new evidence with the old, she must dig deeper and find out more about the fractured Collins family and the original detective, Amanda Baker. A woman plagued by her failure to find Jessica. Erika soon realises this is going to be one of the most complex and demanding cases she has ever taken on.

Is the suspect someone close to home? Someone is keeping secrets. Someone who doesn’t want this case solved. And they’ll do anything to stop Erika from finding the truth.

Just when you think Robert Bryndza can’t possibly produce a third 5* book in 2016 he goes and does exactly that! Dark Water may be my favourite of the DCI Erika Foster series so far. I fell in love with Robert’s writing style and characters in The Girl in the Ice and they just keep getting better and better.

Dark Water sees a new beginning for DCI Foster. Erika is working on a narcotics case at a new station when her team unearth the skeleton of 7 year old Jessica. Before long Erika finds herself completely immersed in the 26 year old case as she works alongside her fellow colleagues, including the wonderful Peterson and Moss, to bring Jessica’s killer to justice.

This book has plenty of twists and turns along the way. I had a slight inkling to do with the big reveal at the end of the book but I did not predict what actually happened. Dark Water is full of shocking revelations, murder and emotion. It is a very fast paced and exhilarating read which comes to a head in a shocking conclusion.

I really thought this book delivered on its characters. Once again, Robert Bryndza has shown himself to have an in depth understanding of human nature. In each book of this series, he has slowly peeled back Erika’s layers in a magnificent way. To me, Erika seemed a lot more emotionally vulnerable in this story. We see her struggle more with the loss of her husband, we get a glance into her relationship with her sister and we watch as she builds friendships and there is also a hint of romance. Erika is afantastic character and I can’t imagine there will ever come a time where I won’t want to pick up a book in this series.

The detail about the case in this book is excellent and once again Bryndza treads carefully on that fine line between fact and fiction. The story line is realistic and actually climaxes in a highly emotional finale which left me feeling a little sad.

I liked the structure of the book a lot and find that the short, sharp chapters really carry the pace of this book as I constantly wanted more. The interjections of an unfamiliar character’s chapters were welcomed as they started to shed more light on the case and definitely helped to build the tension slowly throughout the book.

This is yet another fantastic addition to the DCI Erika Foster series and I have my fingers and toes crossed that Robert plans to continue with this series for a very long time. There is so much potential for these exceptionally well-crafted characters and limitless possibilities for where their cases and lives could take them. I highly recommend this exhilarating read for anyone who loves a mystery/thriller with relatable characters and a gobsmacking climax!

Thanks to Netgalley, Robert Bryndza and Bookouture for my copy in exchange for a fair and honest review.

Have you read any of the books in the DCI Erika Foster series? What did you think?