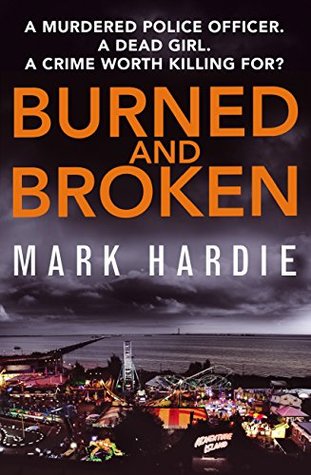 An enigmatic policeman – currently the subject of an internal investigation – is found burned to death in his car on the Southend sea front.

A vulnerable young woman, fresh out of the care system, is trying to discover the truth behind the sudden death of her best friend.

As DS Frank Pearson and DC Catherine Russell from the Essex Police Major Investigation Team are brought in to solve the mystery that surrounds their colleague’s death, they’re under intense pressure to crack the case without damaging the force’s reputation.

When a dramatic turn of events casts a whole new light on both cases, the way forward is far from clear. Were the victims connected in some way? And just how much should Pearson and Russell reveal to their bosses as they begin to unearth some dark secrets that the force would rather keep buried?

Burned and Broken is the debut crime novel from Mark Hardie. DC Sean Carragher’s body has been found burned in a car park but what exactly was he involved in that lead to his murder? And more importantly, who did it? Alicia, a vulnerable sixteen year old girl also recently died, but was her death as accidental as it seemed?

This was different to other crime novels that I have read (granted that I have not read as many as a lot of other people). This book had two stories working alongside one another. One half of the story introduced us to the police investigation surrounding Sean’s murder. Here, we had the inside scoop on the investigation and we got to know his colleagues: Cat Russell and Frank Pearson. The second half of the story is where we come to know Donna, the vulnerable friend of the dead Alicia, who is convinced her friend’s death was not accidental and finds herself in a dark world of prostitution and mental health issues.

I have to admit that this story did not particularly excite me. I liked it, but I didn’t feel much tension building and that is essential for me in a crime novel. I think this was partly because of the two sides of the story being woven together. As much as this worked well, it also took away a little of the tension I wanted as I found myself patiently waiting to discover how the two sides would meet. I had also guessed pretty early on who the murderer would turn out to be and I wasn’t wrong. This was a quick and easy read, despite some paragraphs in this book being almost a whole page long, causing me to skim a little here and there.

I really liked Cat Russell as a character. I cannot leave this review without saying that. I thought she was fantastic and I particularly liked how Hardie touched upon her status in the ‘Job’ as a female. I had a soft spot for Donna and really just wanted to take her in and look after her.

Overall, a good book that I liked and found easy to read. I think if you liked crime books then this one is worth trying and I believe is the first in a series. Mark Hardie certainly has a nice writing style and I would be interested in checking out the next book in the series to see how these characters develop.

Thank you to Clara from Little Brown Book Group for my copy as part of the blog tour.

2 responses to “BLOG TOUR! – Burned and Broken by Mark Hardie”