Hi everyone! Today I’m lucky to be sharing an exclusive extract from the highly anticipated A Blade So Black by L.L. McKinney! You can find out more about the book below but first, here’s an extract for you to enjoy!!

“The closer she drew to the village, the kill site, the more the land seemed to be affected but not tainted—there was a difference. There were signs that life was slowly coming back to the area, a few fledgling plants here, a faint critter call there, but nothing near as vibrant as the rest of Wonderland. Even the wind had fallen still, silent. The immensity of nothing went on in every direction.

Everything’s fine. You’re fine. Calmed though still alert, she put one foot in front of the other. Eventually, the crumbling remains of half-formed houses and shops came into view, jutting up from the ground like bones. Stone blackened from fire, wood splintered and rotting seemed to suck the daylight from the air, leaving a shadowy haze over the entire village. She slowed, her eyes dancing over the ruins. Anything could be hiding here in the shadows, waiting to pounce. Her hands on the pommels of her daggers, she stepped over what remained of a wall.

Ahoon was small, but the emptiness made it seem so much larger. It reminded her of something out of the Middle Ages, old and fantastical even in decay. The main square lay ahead. Every half-fallen wall, decrepit doorway, and shrouded corner wound her a little tighter than before. Like in the woods, there were signs that nature was beginning the daunting task of reclaiming this area. Maybe the people would eventually return as well, harvest those fruits and vegetables Hatta talked about.

Movement caught in her peripheral vision, and she stiffened, daggers partially drawn. That wasn’t a shadow-wisp. It was bigger, quicker. She remained still for a moment before picking her way across the square, pace brisk, eyes fixed ahead. Several more steps and it happened again, to her right. She turned and saw nothing but broken stone and rusty dirt. But she knew better. Her skin prickled. The hairs on her arms stood on end.

Alice’s heart beat faster. Her muscles tensed. The faint buzzing of alarm bristled at the base of her skull. Stopping in the center of the square she crouched, reaching to place the fingers of her free hand against the ground, scrutinizing nonexistent tracks.

Something emerged from a building at her four o’clock, several paces back. It slunk forward, movements measured and deliberate. The sound of steps against cobblestone held a significant difference from the sound of those same steps on dirt, and when they reached the patch of stone on which she now knelt, she pounced.

Her calf caught legs and swept them loose, sending her stalker sailing for the ground with a startled cry. She drew both Figment Blades and leaped onto him, one knee in his gut, the blades pressed against both sides of his neck like scissors waiting to lop off his head.

“Stoy!” he shouted, hands lifted and fingers splayed to show he was unarmed. He stared at her with wide, surprised eyes belonging to a face she recognized.

He nodded slowly, eyeing the blades poised on either side of his neck. “Da.”

Every muscle in her body turned to water, and by force of will alone she didn’t sink down on top of him. “I coulda killed you.”

“I am very aware.” He swallowed, tension thickening his Russian accent. He didn’t relax until she withdrew her weapons.

“What the fel you doin’?” Sheathing her blades, she rose and offered him a hand up.

“Trying to surprise you.” He brushed his hands over his front, then ran them through his blond hair. “Just a joke.”

She snorted and folded her arms over her chest, her bandaged wound aching dully. “You gone get yo ass kicked behind these jokes one day.” Her attention shifted as she eyed the rest of the ruins for Dee’s other half. “Where’s Dem?”

Laughter rang out, rich and thick like syrup. Alice followed it to a nearby house as Dee’s twin brother swung into view, holding on to the doorjamb.

“That was priceless.” Dem snickered as he jogged over to join them.

Dimitri and Demarcus Tweedlanov—Dee and Dem for short—were mirror images of each other: tall, teenage versions of Spike from Buffy. Dreamwalkers as well, and only a couple of years older than she was, they comprised a well-oiled killing machine that sometimes pulled dumbass pranks. She worked with them whenever there was a job to do farther in than Hatta could come, like the fight at Ahoon. They were there, and probably the only reason her ass didn’t end up filleted. They had to be the backup Hatta mentioned.” 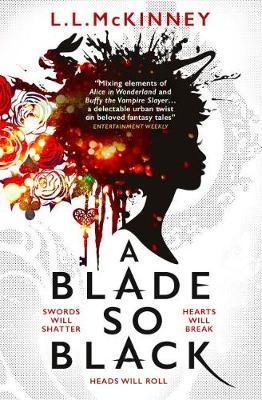 A Blade So Black

Don’t forget to check out the rest of the stops on the blog tour too!

2 responses to “BLOG TOUR: A Blade So Black by L.L. McKinney ~ An Exclusive Extract!”