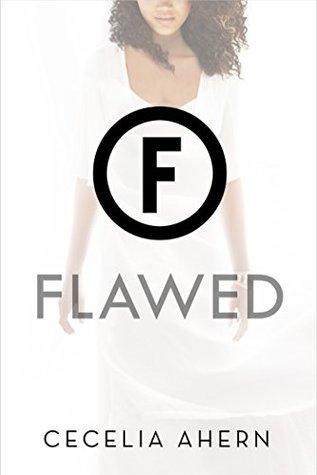 In her breathtaking young adult debut, bestselling author Cecelia Ahern depicts a society in which obedience is paramount and rebellion is punished. And where one young woman decides to take a stand that could cost her everything.

I’ll start by saying that I did like this book. But I didn’t love it and I certainly wasn’t blown away by it. If, like me, you have read a variety of dystopian YA novels, then there won’t be much in this novel that will blow you away. We have a leading female character who gets herself in a spot of bother after standing up for her beliefs, a sort-of love triangle and people rallying to her cause (which she inadvertently started). Sound familiar?

I did really like the concept of this novel, however. Personally, I cannot imagine living in a world where people deemed to be imperfect, or Flawed, are branded and left to live a life outside of the norm. Different food allowances, no more than two Flawed people together at a time, lie detector tests each day, no alcohol and a curfew… I couldn’t imagine it. Everyone has flaws and I often think that these flaws can be beautiful in many people, they definitely define us has human beings.

The characters were quite well written. For me, I didn’t particularly love Celestine (the main character). I found her quite frustrating at times and actually much preferred her sister, Juniper. But again, this is personal preference and I am sure that there will be enough people out there who do like Celestine. Plus, you don’t have to love a character to enjoy the story! I was terrified of Judge Crevan. (For some reason I picture him in my head to look like Frollo from The Hunchback of Notre Dame.) He is so evil and I actually liked him because of this.

I won’t write much in the way of spoiling the plot but some parts of it were fairly predictable if you follow the usual dystopian pattern. I enjoyed learning about the life of the Flawed and seeing the effect of having a Flawed person in the family. For me, some of the chapters were incredible. They were really fast-paced and action packed and I could easily devour three or four chapters without realising it. Then all of a sudden I would find myself reading through chapters which were a lot slower in pace and not as much importance (in my opinion) to the plot of the story. This ruined the story for me in a way as every time I started to feel really excited by it, it seemed to slow back down and I just didn’t feel that spark of excitement.

I would say that there are some scenes in this book that I felt a little bit uncomfortable reading. There is nothing sexually graphic, but one of the chapters describing the brandings did make me feel a bit sick, but it was a perfect example of the effectiveness of Ahern’s writing style. This shouldn’t put anyone off reading this book though.

The romance isn’t overwhelming in this book at all. Celestine is in a relationship with Art which comes under considerable strain during the story. Carrick isn’t actually in the book a huge amount. He actually appears more in Celestine’s thoughts about him than he does in any dialogue with her. I actually wish Carrick had been in this more as I think he will be a great character and I’m intrigued to learn more about him.

The concept. I really thought it was an interesting take on a dystopian society. The idea of a society where Flawed people are considered to be lesser humans was interesting to me and I did like the way this was represented in the book. I liked that the author had considered that people would be branded in different locations based on the way in which they were Flawed.

On the whole, I did like this book, I just didn’t feel crazy about it. Had there been a little bit more action in parts then this would have been a solid 4 stars. If you like dystopian novels then you will probably like this, just don’t expect to be totally blown away as it is fairly predictable. A good debut from Cecelia Ahern in the YA genre.

Is Flawed on your tbr? What are you hoping for?

5 responses to “Flawed by Cecelia Ahern”