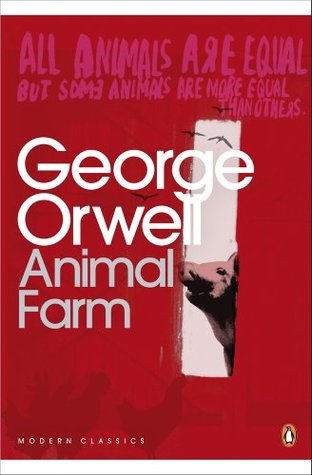 Synopsis: ‘It is the history of a revolution that went wrong – and of the excellent excuses that were forthcoming at every step for the perversion of the original doctrine,’ wrote Orwell for the first edition of Animal Farm in 1945. Orwell wrote the novel at the end of 1943, but it almost remained unpublished. Its savage attack on Stalin, at that time Britain’s ally, led to the book being refused by publisher after publisher. Orwell’s simple, tragic fable, telling what happens when the animals drive out Mr Jones and attempt to run the farm themselves, has since become a world famous classic.

Animal Farm is one of those rare books that can be read in two ways:

As a child, this could easily be read simply as a group of animals on a farm getting rid of the farmer, coming together to live, eat and build together. As a child you could learn to love the animals but just as equally hate the pigs for being ‘the baddies’. You could easily put this book down without realising its significance.

As an adult, reading this book is quite a defining experience. It is an interesting and unique take on dictatorship and reflects Orwell’s feelings about Stalin’s regime. We are all well aware of Stalin’s regime in the Cold War. Of course, we also know of the horrors inflicted upon others by the Nazi’s and we have all experienced the effect of terrorism in our present world. This short story takes those concepts and applies them in a new way: to animals.

Orwell very cleverly shows how an uprising, seemingly for the benefit of everyone, can quickly turn into a dictatorship, with those leading being the only ones to benefit. The boar Napoleon is Orwell’s reflection of Stalin himself, the leader of the dictatorship, and we see how Napoleon uses those around him to get what he wants while inflicting terror and uncertainty among the other animals. Even those who are wary of him are too scared to question him, because surely their leader is right?

I enjoy the whole concept of this book. On the outside, it is a simply story about animals taking over a farm but on the inside it is a complex, interesting and profound insight into dictatorship and the human condition. I love how so many things the animals can do are personified: they can read, write, build – the pigs even sleep in beds and start walking on their hind legs. Leaving us on the note that the pigs and men were blurring into one is a very clever ending to this piece of literature.

“Man serves the interests of no creature except himself.”

This is a profound and important story with strong messages about society and the human condition. A must read for everyone.

Have you read Animal Farm? What did you think?