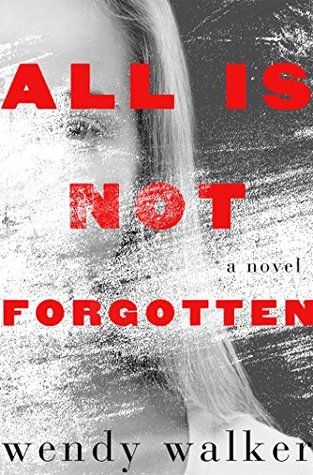 All Is Not Forgotten

Synopsis: It begins in the small, affluent town of Fairview, Connecticut, where everything seems picture perfect.

Until one night when young Jenny Kramer is attacked at a local party. In the hours immediately after, she is given a controversial drug to medically erase her memory of the violent assault. But, in the weeks and months that follow, as she heals from her physical wounds, and with no factual recall of the attack, Jenny struggles with her raging emotional memory. Her father, Tom, becomes obsessed with his inability to find her attacker and seek justice while her mother, Charlotte, struggles to pretend this horrific event did not touch her carefully constructed world.

As Tom and Charlotte seek help for their daughter, the fault lines within their marriage and their close-knit community emerge from the shadows where they have been hidden for years, and the relentless quest to find the monster who invaded their town – or perhaps lives among them – drive this psychological thriller to a shocking and unexpected conclusion.

As they seek help for their daughter, the fault lines within their marriage and their close-knit community emerge from the shadows where they have been hidden for years, and the relentless quest to find the monster who invaded their town – or perhaps lives among them – drive this psychological thriller to a shocking and unexpected conclusion.

TRIGGER WARNING: This book contains graphic descriptions of rape and self-harm which may be triggering to readers.

I went into this expecting one thing and came out having read the complete opposite of what I was expecting. I thought this would be a fast-paced, suspense filled ‘whodunnit’ but it turned out to be a very slow read. In fact, by the end I had forgotten that I didn’t know who had raped Jenny because I didn’t really feel that was where the book was going.

My main issue with this book was that I just hated the narrator. The book is narrated by Jenny’s therapist, Alan. I didn’t enjoy reading this from his point of view. I thought he was an egotistical narrator and I found that I simply didn’t care for him and it stopped me from creating the connection to the other characters in the books. I would have liked to see more POVs in the book: a few chapters from Jenny, Tom or Charlotte would have made this a lot more interesting to me. To me it also felt as though there were many paragraphs (sometimes sections of chapters) that were completely irrelevant and I found myself skimming over some parts – something I NEVER do.

The story itself was interesting. A young girl who was brutally raped in the woods who then underwent memory erasing therapy. This is the story of how Jenny is trying to get her memories back so that she can move on with her life. With a different narrator and writing style, I think I would have liked this but I just can’t get past the narrative style. It wasn’t for me. The ending wove together neatly and I hadn’t figured out the identity of the rapist but also didn’t feel blown away by the reveal.

I have to note that there are some extremely graphic descriptions of sexual violence and rape in this book. There were several paragraphs where I felt wholly uncomfortable in reading this book and it definitely won’t be something for everyone. The descriptions of attempted suicide were also very graphic and would be incredibly overpowering for many readers.

I’m not sure there was anything I ‘loved’ about this book but I did like the concept of the story and the idea the author created. There was a lot of psychology in the book and that was interesting to me but I just wasn’t hooked by the characters at all. I blame it on my bad relationship with the narrator.

There’s no denying that this is a book which took a lot of research and I’m sure there will be plenty of readers who enjoy it. It just wasn’t for me.

Thanks to Netgalley, the author and publisher for my free copy in exchange for an honest review.

Have you read All Is Not Forgotten? What did you think?

3 responses to “All Is Not Forgotten by Wendy Walker”