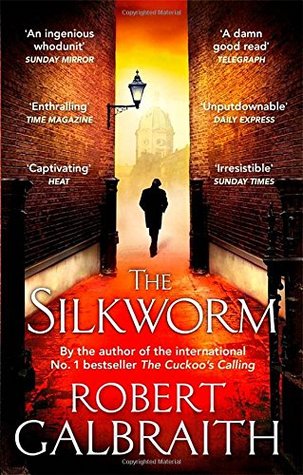 Synopsis: When novelist Owen Quine goes missing, his wife calls in private detective Cormoran Strike. At first, Mrs. Quine just thinks her husband has gone off by himself for a few days—as he has done before—and she wants Strike to find him and bring him home.

But as Strike investigates, it becomes clear that there is more to Quine’s disappearance than his wife realizes. The novelist has just completed a manuscript featuring poisonous pen-portraits of almost everyone he knows. If the novel were to be published, it would ruin lives—meaning that there are a lot of people who might want him silenced.

When Quine is found brutally murdered under bizarre circumstances, it becomes a race against time to understand the motivation of a ruthless killer, a killer unlike any Strike has encountered before…

On the whole I really enjoyed reading this book. I was quickly captured by the plot and the gruesome murder of Owen Quine. Cormoran Strike and Robin make an excellent team and I loved seeing how their relationship developed in this story. Galbraith’s depiction of London is spot on and the writing style is both simple and highly detailed at the same time.

What I liked most about the book:
* The characterization is fantastic! I absolutely love Strike and Robin as characters and I love to loathe most of the other characters.
* The writing style is easy to read and flows well.
* I didn’t know who the killer was at the end and that is a great thing!
* As a bookworm I loved that this book was focused on a writer and the damning book he had written which told of his own murder.

What I wasn’t so fond of…
* This was a long winded book. There were several chapters which really weren’t necessary to the overall story and they really could have been cut out which would have helped to pick up the pace and create more suspense.
* Robin and Matthew arguing constantly!! I’ve reached a point where this is just completely irritating and they need to sort themselves out or do what needs to be done!
* Throughout the investigation whenever Strike thought he had made progress, we as readers are left out of the loop. I would have like to know a little more about his thought processes so that I also could have attempted to work out who the killer was.

“We don’t love each other; we love the idea we have of each other. Very few humans understand this or can bear to contemplate it. They have blind faith in their own powers of creation. All love, ultimately, is self-love.”

“Though they spent so much time trying to make themselves beautiful, you were not supposed to admit to women that beauty mattered.”

Another great mystery novel from Galbraith/Rowling. I love Strike and Robin working as a team and I look forward to reading the next book in the series!

Have you read The Silkworm? What did you think?

One response to “The Silkworm (Cormoran Strike #2) by Robert Galbraith”