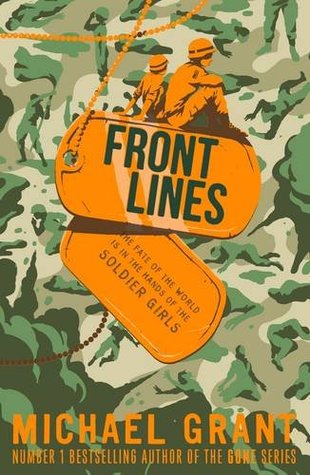 Set in an alternate World War II where young women are called up to fight alongside men, this is the story of Rio Richlin and her friends as they go into battle against Hitler’s forces.

But not everyone believes that they should be on the front lines. Now Rio and her friends must fight not only to survive, but to prove their courage and ingenuity. Because the fate of the world is in the hands of the soldier girls.

The first of three books, this is Michael Grant at his epic best.

When I first received this book from the lovely people at Egmont I really didn’t know what to expect. I knew this was a YA historical fiction novel based heavily on telling world war two from the perspective of female soldiers. The feminist in me was dying to read this book and so I jumped straight in.

Front Lines is gritty. It certainly is not your average YA read and doesn’t hold back from the harsh reality of life as a soldier during the war. There are many descriptions of the devastating effects of the war and anyone with a weak stomach may not be fully prepared for those moments. I am glad they are included though because to lighten up the effects of the war for the sake of writing a book would not have been okay and certainly would not have done justice to the many fallen soldiers whom we still remember and thank to this day.

I love, love, loved that this was told from the perspective of female soldiers. It is not often that the stories of those strong women are told, if anything they are completely forgotten about. But this is much more than just a book about female soldiers in the way. Grant takes every opportunity possible to explore the prejudice and social injustice held against women in the 1940s. Even more importantly, Grant does not brush every woman with the same experience either. Within his three main characters, Grant has created a diverse group of strong females who each face different prejudices and we clearly see the effect this has on them.

Rio is our main leading lady with the majority of the book being from her POV. Rio is a white teenage girl from a small town in California who enlists for the army. After vigorous training, Rio finds herself drafted to the front lines of the war and discovers that she is much more capable than she first believed. Frangie Marr is an African-American girl from Oklahoma. She enlists in order to help her own family and despite much adversity follows her own path to become a medic in the Army. Frangie faces an enormous amount of racism on top of the comments made about her gender. The segregation between black and white people even within the army is also reflected. Our final lady is the white, Jewish Rainy from New York who faces prejudice not only for her gender but also for her religion. Rainy was certainly a sassy little thing when she wanted to be but I felt we didn’t see enough of her.

My favourite thing about this book is definitely the characters. I’ve not read anything by Michael Grant before but if his characterization in this book is anything to go by then I need to read more from him. I am a sucker for well developed characters and these girls were certainly fully developed individuals, each with their own importance. My favourite so far is Frangie who I just think is an absolute darling. Despite the cruel racism towards her, Frangie is such a caring person who is desperate to save the lives of anyone she can regardless of gender, religion, race or nationality. I hope there will be more from Rainy in book two as I liked her but didn’t feel I got to spend enough time with her like I did Rio and Frangie.

Throughout this book the prejudice against women in general is astonishing. I loved that it was so true to the time and thought this was important, but it still made me so mad. There are so many comments about how the female soldiers are weaker than the men, shouldn’t be there, and are only good for being wives and having children, not to mention the leering comments from male soldiers. I was really glad to see a book which focused on the barriers women like Rio, Frangie and Rainy broke their way through.

Something I think I needed more of in this book was plot. This is a book about the war and although the war scenes are violent, messy and emotionally driven, it was almost 2/3 of the way into the book before we really arrived there. Whilst I appreciated the time we had to get to know the characters, I would have liked more to happen. Hopefully this is a great set up for book two though. We shall see!

Overall I thought this book was a great read and I learnt a lot from it. Whilst the prejudices against Rio, Rainy and Frangie were painful and infuriating to read, I thought it was very well written to be true to the time period, as is appropriate in historical fiction. It makes me proud of how far things have come for women, even if there are still many glass ceilings for us to smash our way through.

Have you read Front Lines? What did you think?

Who is your favourite of the leading ladies?