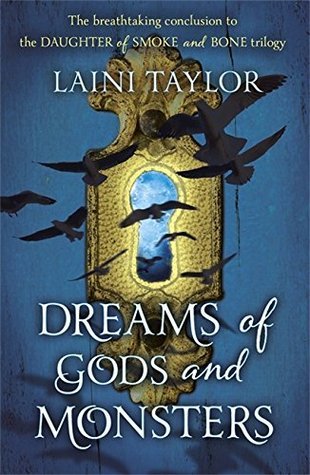 Dreams of Gods and Monsters (Daughter of Smoke and Bone #3)

By way of a staggering deception, Karou has taken control of the chimaera rebellion and is intent on steering its course away from dead-end vengeance. The future rests on her, if there can even be a future for the chimaera in war-ravaged Eretz.

When Jael’s brutal seraph army trespasses into the human world, the unthinkable becomes essential, and Karou and Akiva must ally their enemy armies against the threat. It is a twisted version of their long-ago dream, and they begin to hope that it might forge a way forward for their people.

And, perhaps, for themselves. Toward a new way of living, and maybe even love.

But there are bigger threats than Jael in the offing. A vicious queen is hunting Akiva, and, in the skies of Eretz … something is happening. Massive stains are spreading like bruises from horizon to horizon; the great winged stormhunters are gathering as if summoned, ceaselessly circling, and a deep sense of wrong pervades the world.

What power can bruise the sky?

From the streets of Rome to the caves of the Kirin and beyond, humans, chimaera and seraphim will fight, strive, love, and die in an epic theater that transcends good and evil, right and wrong, friend and enemy.

At the very barriers of space and time, what do gods and monsters dream of? And does anything else matter?

Just when I thought there was no way that Laini Taylor can top the first two books in the series, she goes and does just that. Dreams of Gods and Monsters is a glorious conclusion to the trilogy.

Rather than using book three just to wrap up all the loose ends in an epic conclusion, Taylor opens Dreams of Gods and Monsters with chapters that leave the reader with more questions than they started with. There was the introduction of some new characters, who I knew would be key to the story, somehow. But there was also plenty more action from our beloved Karou, Zuzana, Mik, Akiva, Liraz, Issa and gang.

The more I think about this series, the more I realise that I don’t think I can pick out my favourite element. The characters possibly just edge it for me but the world building in this series is just phenomenal. One of my favourite things is that although this book is a fantasy novel, it is very much grounded in our real world. There is the mention of social media, mobile phones, televisions and a portion of this book is set in Rome. Whilst this has been something I’ve liked throughout the trilogy, it felt at its most powerful in this final book where Karou and Akiva are desperately trying to put a stop to Jael’s evil plans for the human world. I thought that the fact the fantasy aspects of the world came from a parallel universe was really interesting and it really does leave you wondering if there could be something out there!

Laini Taylor’s writing has very, very quickly become some of my favourite. Her power over the words she puts down on the page is majestic. I still cannot fathom how these wonderfully written, poetic, magical sentences, paragraphs and pages can come out of her brain. Whilst reading you can tell that every word has been chosen with a purpose. Everything means something and I felt like I was in a mythical trance the whole time I was reading. I loved how she was able to capture my attention so quickly with her words.

I loved imagining what all of the characters looked like which was hugely helped by the wonderful descriptions in the books. Conjuring up my own versions of the chimaera in all of their glory was one of my favourite things to do whilst reading this series. I loved how inventive the combinations were and in my mind all of these creatures were glamorous in their own right.

Let’s have a quick overview of my character feelings (without too much detail because I don’t want to spoil anyone!). Karou: quickly has become a new fictional favourite of mine, she is strong-willed, courageous, spirited and brave. At the same time she is loving, generous and kind. I just LOVE her. Zuzana: hilarious, gosh did she make me laugh, sassy but her inner strength and hidden generosity warmed my heart. Mik: adorable. What else can I say? Akiva: just the mention of his flamed eyes sets something alight inside of me. He made me feel so many emotions throughout the course of these books. Liraz: fierce, courageous and secretly kind-hearted. I admired her a lot. Ziri: sweet, sweet Ziri. Issa: I just love Issa a lot and I enjoy hissing her name knowing that she is part snake. Jael: terrifying! Just the thought of him makes my skin crawl but also, what a great villain! I’m going to stop now before I actually name every single character…

Basically, I have read the entire trilogy in 6 days and by this point I am a complete and utter fangirl and wanting to discuss these books with everyone so if you have read them please let me know! The ending few chapters and THAT epilogue reduced me to a mess of silent tears. I don’t think I even realised I was crying at first, that’s how much emotion was conjured up within me from Taylor’s writing. I had no idea how much of an emotional toll this book was taking or that the characters mattered to me quite as much as they did. Tragic but so beautiful throughout.

If you love well written fantasy with superb world building, magical writing and a whole host of powerful characters then you should pick up this trilogy immediately. You won’t be disappointed!

Have you read Dreams of Gods and Monsters? What did you think?

What is your favourite fantasy YA series?

4 responses to “Dreams of Gods and Monsters by Laini Taylor”