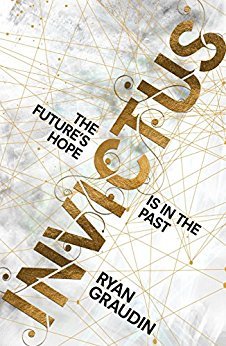 Farway Gaius McCarthy was born outside of time. The son of a time-traveling Recorder from 2354 AD and a gladiator living in Rome in 95 AD, Far’s birth defies the laws of nature. Exploring history himself is all he’s ever wanted, and after failing his final time-traveling exam, Far takes a position commanding a ship with a crew of his friends as part of a black market operation to steal valuables from the past.

But during a heist on the sinking Titanic, Far meets a mysterious girl who always seems to be one step ahead of him. Armed with knowledge that will bring Far’s very existence into question, she will lead Far and his team on a race through time to discover a frightening truth: History is not as steady as it seems

I started reading Invictus without really knowing much about it. I knew it had something to do with space and that people were super excited for its release. I hadn’t previously read anything by Ryan Graudin either but her other duology is on my tbr. Let me tell you, this book was a real treat!!

Invictus is an exhilarating ride throughout time and history. I loved the time travel aspects and the way in which real historical events were visited. There was something about the crew visiting the Titanic just before it sank that made this book feel so real. I’ve not read a book like this before that flitted so easily between Sci-Fi and Historical Fiction. The timey wimey parts were easy enough to get along with and the idea of different universes and time spaces was really intriguing.

Whilst reading this book I could tell just how much research must have gone into writing it. As well as the historical elements, this book is a complex web of timelines for the different characters involved and it must have taken quite some planning to make sure it all entwined so seamlessly. Graudin took the time to consider the effects of visiting different societies and time periods and I was pleased when there was a part of the book where Gram, who is black, was worried about visiting certain time periods because of how black people were treated at the time. I was really glad to see that this was considered and acknowledged.

The crew aboard the Invictus really made this book for me. Although Farway is our leading character, each of the other crew members was just as layered and I felt drawn to them all in their own way. It was nice that the book was written with bits from each of their POV because that really helped me to make those connections.

My favourite character from the crew is probably Imogen because she just felt like a breath of fresh air. Her daily hair colour change represented her bright, wild side to me and her optimism and love for everyone on board was really refreshing. Not to mention that she has a furry red panda friend called Saffron – I’d love a red panda to cuddle! Imogen is incredibly intelligent, being the onboard Historian and her eye for detail has made for many successful missions. I also really liked Priya and although I didn’t trust her at all to begin with, Eliot really came into her own for me too. (Look at that, once again I love all the female characters…)

There were a few things about this book that really stood out for me. The first of those is how strong the family bonds were threaded through the book. Farway and Imogen are cousins and Farway is determined to locate his Mum who has been lost in time. There are some really heartbreaking family moments in this book as well as some shocking reveals, twists and turns. The friendships were also fantastic: there is such a bond between the Invictus crew and you can see clear as day why they get on so well. They all balance each other out: Farway is ambitious, determined but can also be hot-headed whilst Priya is intelligent, caring and a calming presence. Imogen is bright, vivid and funny whilst Gram is a bit quieter, thoughtful and studious. They all balanced each other out so well.

I loved the romances in this book and thought they were really well written and incorporated into the story without becoming the story. This book is in no way about the romances, but they are mentioned and I really liked the way it was done. The romances are tender, sweet and feel so genuine. One of them is already fully fledged as we read whilst the other is building over time and my little shipper heart was willing it on SO much.

Invictus had me on the edge of my seat with its twists, turns and reveals. As we raced through time to reach our end, I laughed, loved and cried. A fantastic book for anyone who is a fan of sci-fi and time travel.

Thank you to NetGalley, Orion Children’s Books and Ryan Graudin for my advanced copy in exchange for an honest and fair review.

Have you read Invictus? What did you think?

What YA sci-fi books do you recommend?

4 responses to “Invictus by Ryan Graudin”