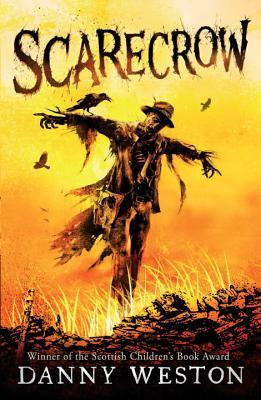 Jack and his dad are runaways. Jack’s father recently turned whistleblower, revealing the truth about the illicit dealings of some powerful people. Realising that he and Jack might be in danger, Dad drives them to a remote shooting lodge in the Scottish Highlands, where they intend to lay low.

In the cornfield beside the lodge stands a scarecrow. When Jack witnesses something incredible, he begins to realise that it is no ordinary scarecrow – it is alive, hungry and fuelled by rage. And when Dad’s enemies begin to converge on the lodge, the scarecrow might just turn out to be Jack’s best hope of survival.

Scarecrow is a book that I very kindly received a copy of for review, I’m not sure if I ever would have come across it otherwise. It wasn’t as scary as I had hoped it would be but I did enjoy it. The cover is also gorgeous and super creepy!

Jack and his Dad are on the run, Jack doesn’t really know why but one morning his Dad puts him in the car, tells him to leave his phone behind and drives them to Scotland, to a remote village where they cannot be found. It doesn’t take long before Jack notices something strange about the old scarecrow in the field near their cottage and from there things take many twists and turns.

I’m going to split this review into what I really liked about the book and what I didn’t love so much.

Overall I liked this book and would recommend to younger readers. Jack is a fantastic MC and I really warmed to him.

A big thank you to the lovely Harriet at Anderson Press for my copy in exchange for a fair and honest review.

Have you read Scarecrow?

4 responses to “Scarecrow by Danny Weston”