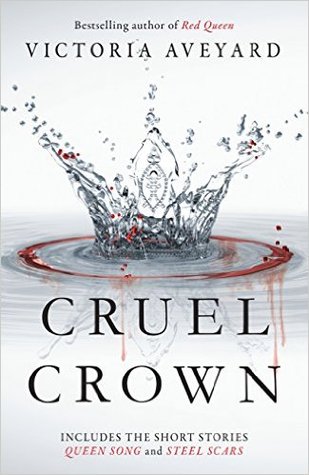 Synopsis: Two women on either side of the Silver-Red divide tell the stories no one else knows.

Queen Song – Queen Coriane, first wife of King Tiberias, keeps a secret diary—how else can she ensure that no one at the palace will use her thoughts against her? Coriane recounts her heady courtship with the crown prince, the birth of a new prince, Cal, and the potentially deadly challenges that lay ahead for her in royal life.

Small Scars – Diana Farley was raised to be strong, but being tasked with planting the seeds of rebellion in Norta is a tougher job than expected. As she travels the land recruiting black market traders, smugglers, and extremists for her first attempt at an attack on the capital, she stumbles upon a connection that may prove to be the key to the entire operation—Mare Barrow.

This two short stories are an interesting read for anyone who is a fan of Aveyard’s Red Queen and upcoming Glass Sword. The world of the Red’s and Silver’s is presented to us from both sides of the world in contrasting ways. We learn all about life as a Silver and the fight against them with the Scarlet Guard.

Queen Song – 3.5 stars
In the first novella, we follow a young Coriane, before she became Queen. We learn of her family history and teenage friendship with Tiberias before their romance blossomed. We learn of her struggles to have their first child and see the birth of Cal. We also see her struggle against Elara and the deadly consequences of her royal life. I really liked learning more about Coriane as it gave me a real insight to how hard life can be, even for a Silver.

Small Scars – 4 stars
In the second novella, we follow the story of Farley as we watch her go against Command with her role as Captain in the Scarlet Guard. We see Farley recruiting to the rebellious Scarlet Guard and her developing relationship with Shade Barrow, who is more like Mare than we knew. Farley is a character who I was intrigued by in Red Queen. A rebellious, strong woman, exactly the kind of character I love.

Which novella did I prefer?

My favourite was ‘Small Scars’ as I really liked Farley as a character in Red Queen and was keen to find out more about her, although both stories were great, quick reads.

These novella are a great read for any fan of Victoria Aveyard’s Red Queen series. If you are interested in learning more about the world of Silver/Red and about two strong, but different female characters, these short stories will fill the void in the coming days before the release of Glass Sword.