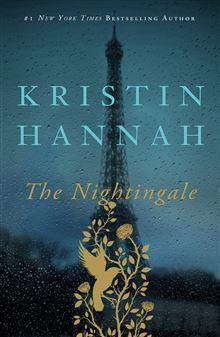 Synopsis: Two sisters. One must be brave. One should be afraid.

Bravery, courage, fear and love in a time of war.

Despite their differences, sisters Vianne and Isabelle have always been close. Younger, bolder Isabelle lives in Paris while Vianne is content with life in the French countryside with her husband Antoine and their daughter. But when the Second World War strikes, Antoine is sent off to fight and Vianne finds herself isolated so Isabelle is sent by their father to help her.

As the war progresses, the sisters’ relationship and strength is tested. With life changing in unbelievably horrific ways, Vianne and Isabelle will find themselves facing frightening situations and responding in ways they never thought possible as bravery and resistance take different forms in each of their actions.

The Nightingale is so much more profound and touching than I expected. This is a story of love and loss. This story broke my heart. I think I cried for the last 3-4 chapters whilst I read and by the end of the last chapter I couldn’t stop. I have fallen completely in love with this story and with Isabelle and Vianne.

At a first glance, it would be easy to assume that this is your average World War II historical fiction novel. We have a woman who is left to raise her daughter when her husband goes to fight the Germans; we have her sister who falls head over heels in love with a resistance fighter she has just met; the Nazi’s are awful; the Jewish people are deported and war threatens to destroy the whole of France. However, this novel is so much more.

It is a beautifully written novel which focuses on the stories of sisters Vianne and Isabelle. These two sisters, who lost their mother and spent years feeling rejected by their war hero father, could not be more different. Vianne is a wife, a mother, a teacher, a believer in hope, somebody who patiently awaits the return of her husband from the war and does not fully understand the impact of the war on France. Isabelle is much younger, but stronger. She seeks the love of her father, she desperately wants to be involved in the war effort against the Germans, she is bold, strong and willing to sacrifice herself for a better France.

We see Vianne struggle to feed herself and her daughter, she struggles to accept the fate of her Jewish best friend and accept the help of a Nazi. Vianne is a fiercely protective mother to her darling Sophie and submits herself to horrific treatment by one of the Nazi’s in order to protect her children from harm. Vianne’s development throughout the novel is one of my favourite things. She starts out as a young mother who is slightly naive to the world around her, but with the horrors she witnesses we see her become so much more. She is more like Isabelle than even she first thought.

Isabelle’s story was my favourite of the two. As much as I adored Vianne, I felt so passionate about Isabelle and her storyline broke my heart. She sacrificed everything to save the fallen pilots, endangering herself and her loved ones along the way. Reading of her experiences in the concentration camps and at the hands of the Nazi interrogators at the end of the book totally broke me.

Full of beautiful descriptions and scenery it was easily to visualise the effect the war had on France. Aside from the story of the two sisters, this novel does nothing to hide the devastating impact that the occupation of France by the Nazi’s had on the French people, especially the women. Many women were left widowed with children to care for and many of them fell into the arms of Nazi’s as a way to protect their children. I can’t begin to imagine living in a world where I felt unsafe in my own home because I shared it with the enemy.

I love that this story focused so heavily on the role of women in the war. We all know that historically men claim war to be theirs, but without women so many men wouldn’t have survived the war and this is a beautiful nod to those brave, strong women. Vianne and Isabelle are such wonderful woman and both had an impact on me whilst reading this book. My favourite of the two is Isabelle, but I adore Vianne too.

“But love has to be stronger than hate, or there is no future for us.”

“It is easy to disappear when no one is looking at you.”

This is an emotional, moving and beautiful novel about love, loss and hope. This has easily become a favourite and I think it’s going to stay with me for quite some time. Wonderful.

Have you read The Nightingale? What did you think?

6 responses to “The Nightingale by Kristin Hannah”