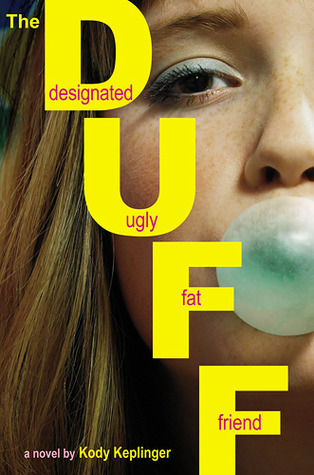 Synopsis: Seventeen-year-old Bianca Piper is cynical and loyal, and she doesn’t think she’s the prettiest of her friends by a long shot. She’s also way too smart to fall for the charms of man-slut and slimy school hottie Wesley Rush. In fact, Bianca hates him. And when he nicknames her “the Duff,” she throws her Coke in his face.

But things aren’t so great at home right now, and Bianca is desperate for a distraction. She ends up kissing Wesley. Worse, she likes it. Eager for escape, Bianca throws herself into a closeted enemies-with-benefits relationship with him.

Until it all goes horribly awry. It turns out Wesley isn’t such a bad listener, and his life is pretty screwed up, too. Suddenly Bianca realizes with absolute horror that she’s falling for the guy she thought she hated more than anyone. And eventually, through this realization, Bianca begins to see how harmful her unhealthy way of dealing with her problems has been, and finds a way to confront them head on.

I liked this book, in fact I really enjoyed it. This is your typical teenage read and I definitely feel that if I were a teenager reading this, I probably would have liked it even more. It reminded me of when I read the Confessions series by Louise Rennison. It had a fairly light-hearted and carefree feel to it but at the same time dealt with some much deeper issues such as self-image.

I think at some point in our lives we have all felt that we are the DUFF but as this book so cleverly points out – there is nothing wrong with that. You can only be the DUFF if you allow yourself to be and I liked that message in the book. I kind of wish we had seen a bit more of this explored towards the end.

I still can’t decide if I like the main character or not. Bianca is a cynical and extremely sarcastic character and while I have no problem with these qualities (I am a very sarcastic person myself), I just felt that she made some incredibly questionable and silly choices. I did, however, really like some of the other characters such as Jessica and Wesley.

There is a LOT of love and romance in this book (although, of course, that is to be expected given the nature of the story!) and at times I felt it was a little too much. However, that’s just personal choice. What I will point out is that there are a lot of quite descriptive sex scenes in this book, something which I certainly wasn’t expecting. I was just surprised to find some of the descriptions in a young adult book.

There was some really good humour in this book. At times I couldn’t help but laugh to myself at some of the things Bianca said (although many of her choices were questionable!).

“No matter where you go or what you do to distract yourself, reality catches up with you eventually.”

“I was the Duff. And that was a good thing. Because anyone who didn’t feel like the Duff must not have friends. Every girl feels unattractive sometimes. Why had it taken me so long to figure that out? Why had I been stressing over that dumb word for so long when it was so simple? I should be proud to be the Duff. Proud to have great friends who, in their minds, were my Duffs.”

I liked the book. I read it as my sister told me that the film was hilarious. Since reading the book I have watched the film and I must admit it won’t be joining my list of favourites. I would rather keep to my Mean Girls binge when I want a good dose of teen comedy. It wasn’t an awful film, I just expected more from it – which is probably the problem! Here’s the trailer for anyone who is thinking of checking it out:

Have you read The DUFF? What did you think?

5 responses to “The DUFF by Kody Keplinger”