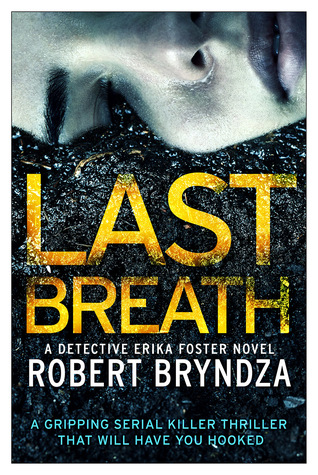 He’s your perfect date. You’re his next victim.

When the tortured body of a young woman is found in a dumpster, her eyes swollen shut and her clothes soaked with blood, Detective Erika Foster is one of the first at the crime scene. The trouble is, this time, it’s not her case.

While she fights to secure her place on the investigation team, Erika can’t help but get involved and quickly finds a link to the unsolved murder of a woman four months earlier. Dumped in a similar location, both women have identical wounds – a fatal incision to their femoral artery.

Stalking his victims online, the killer is preying on young pretty women using a fake identity. How will Erika catch a murderer who doesn’t seem to exist?

Then another girl is abducted while waiting for a date. Erika and her team must get to her before she becomes another dead victim, and, come face to face with a terrifyingly sadistic individual.

Gripping, tense and impossible to put down, Last Breath will have you on the edge of your seat, racing to the final dramatic page.

DCI Erika Foster is back! I loved Last Breath so much. Before going in I was a little worried that Robert Bryndza’s magic may run out. This is the fourth book in the series and the first three have all been 5*reads for me. Surely that can’t go on forever? But I was DELIGHTED to fall straight back in love with his characters and find myself in the middle of another fantastic and interesting murder investigation.

I really loved that Last Breath focused so heavily on social media and its many dangers. With programmes such as Catfish being so popular, I thought this was a really current novel. Our killer in Last Breath lures in his victims using fake online accounts but for me the real sinister thing about it was just how much work went into manipulating the women. There was something very chilling about the way he made the women add him on social media and think they were the ones in control before meeting them and bringing them to the most brutal endings.

This is unlike most thrillers that I read as there was no ‘whodunnit’ revelation that I was waiting for. Instead the killer is revealed to us early on in the novel and we read chapters from his perspective as well as Erika’s. I thought this was a superb way to raise the stakes when it comes to how thrilling the novel is. I was practically screaming at my Kindle with frustration when he was getting away with things right in front of their faces. I was terrified when I could see they were getting close but didn’t know if they would get there in time. It was truly excellent.

One of my favourite things about Robert’s books is his characterization, it is honestly fantastic. I am in love with Erika, Peterson and Moss. They are so well written and they feel more like friends than book characters. I would love to see them brought to life on the screen, their chemistry is so well written that I am dying to see it played out in person! I was particularly happy with Erika and Peterson’s new venture too!!

I don’t know how Robert does it but I can only keep my fingers and toes crossed that more deliciously dark murder cases will be coming our way soon!

A big thank you to Netgalley, Bookouture and Robert Bryndza for my advance copy in exchange for a fair and honest review.

Have you read Last Breath? What did you think?

What are your favourite thrillers?