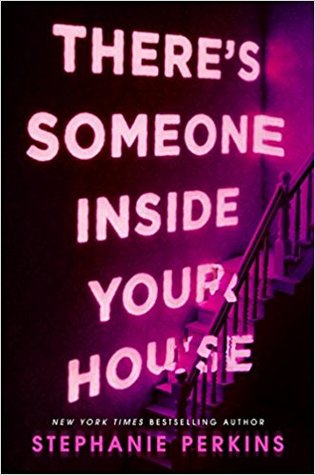 There’s Someone Inside Your House

Scream meets YA in this hotly-anticipated new novel from the bestselling author of Anna and the French Kiss.

There has been so much hype around this book. I have never read a book by Stephanie Perkins before this one and maybe that will have had some effect on my judgement of There’s Someone Inside Your House.

Let me clear something up: this is not a bad book. The book itself is okay, the story is okay and the plot is okay. But that’s what this is for me, a book which is okay. One that I am glad to have read but probably not one I will be shouting about passionately or rereading.

I don’t read a lot of horror books but when I do I want them to terrify me. I am the same with horror movies. I both hate and love them but if they don’t scare me then what is the point? There were maybe one or two moments in There’s Someone Inside Your House where I felt a little bit of fear creeping in, but I’m not sure if that was more my own imagination. By the end of the first chapter the first victim has been murdered but then it takes a little while before anything else creepy really happens. I wanted the pace of this book to be action-packed and a race against time, but for about 75% of the book it doesn’t feel that way.

There was quite a lot of focus on the romance in this novel, which isn’t necessarily a bad thing; it just wasn’t what I had expected. (I assume by now that you are gathering that my expectations were something quite different!) The romance itself was nice and I had no problem with that. I liked both Ollie and Makani, I just don’t feel a passionate love for them.

The biggest disappointment in this book for me was the reveal of Makani’s secret past life. Throughout the book we see references to something that Makani did back in Hawaii that caused her to need to move across the country and even change her name to protect her identity. When that big reveal arrived I found myself thinking ‘Is that it?’. Don’t get me wrong what happened was not nice but it was definitely built up to be a lot more than it was.

If you’re looking for a slasher horror that’s not too scary but with some teenage drama and romance then you’ll probably really enjoy this book. It’s an okay book, it just wasn’t what I was hoping for or expected.

Thanks to MyKindaBook and Stephanie Perkins for my advanced copy in exchange of a fair and honest review.

Have you read There’s Someone Inside Your House? Is it on your TBR?