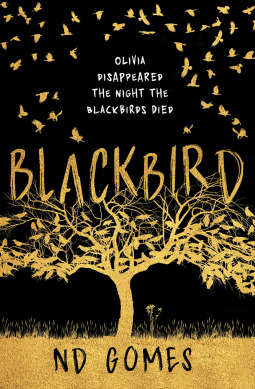 My name is Alex. I am fifteen years old, and I don’t know where my sister is. Or if she will ever come back.

Now Her younger sister Alex is on a mission to find out just what happened to Olivia. But does she really want to know all the answers?

Blackbird was a book I had heard very little about until I was lucky enough to pick up a proof during YALC back in July. The premise sounded really interesting and the book itself looked gorgeous so how could I say no?

I have to start by saying that what the blurb of this book promises is very different to the story held within. The thing that most intrigued me from the synopsis was this idea that 5,000 blackbirds had dropped dead on the same night this girl had disappeared. My mind was racing with ideas of how these two events could be connected and what mysteries lay in store for me. BUT (and this is a big but) the story inside had little to nothing to do with the mystery of the dead birds. It is mentioned at the beginning of the book when Alex is looking at the news when it is being reported but it then transpires to have nothing to do with her sister’s disappearance, which is what I believed it would. That being said, this book is still an absolutely great read, I just think the synopsis was a little misleading.

What this book actually does is provide an interesting and emotional mystery thriller as Alex and her family embark on a journey to find out what happened to Olivia on the night she went missing. There are lots of different twists and turns along the way and the plot certainly kept me interested. There were lots of characters involved in this whodunit style thriller and I had fun ruling out suspects and making my own decisions. As someone who reads a fair amount of stories like this, I did guess who the killer was but only a chapter or so before they were revealed and the climax of the story was so intense that it didn’t matter at all.

This book really sparked a lot of emotion in me. There were scenes in this book where Alex’s grief was clear for the reader to see and sometimes I felt quite choked up and had to take a break. For me, this felt like such a real depiction of grief and the way in which Alex often felt so forgotten about and alone seemed true of her situation. There are some really touching moments in the book between Alex and her parents as they all realise they must pull together to get through their loss and that family element definitely made the story and emotions feel real to me.

I liked the characters in the book although I did feel that aside from Alex we really didn’t get to know many of them as well as I would have liked. I actually really liked that we had a couple of chapters scattered throughout the book that were from Olivia’s point of view before her death and I wish we had more of those as I think knowing more about Olivia would have enforced Alex’s emotions even more to the reader. The only other character I felt somewhat of a connection to in the story was DI Birkens and I actually liked the relationship of trust he built with Alex.

The setting of Orkney for this book was such an interesting choice as it really lent itself to exploring the ideas that in a small island life there are those, like Olivia, who cannot wait to escape and flee into the big world and others, like Alex, who are perfectly content and safe in their bubble. I also really liked that it meant we saw glimpses of tradition with celebrations such as the solstice.

Overall this was a good mystery book with plenty of tension and emotion; I was just disappointed that it wasn’t the book I had been lead to believe it would be.

Thanks to HQ and N. D. Gomes for my advanced copy in exchange of a fair and honest review.

Have you read Blackbird?

What are your favourite YA thrillers?