Hi everyone, today I’m back with my stop on the Michael’s Spear blog tour. I enjoyed this fascinating story of good versus bad and how it steered away from what I was expecting. Check out a very special guest post from the author Hilton Pashley below!

In the film Shadowlands, there is a heart-breaking scene where the adopted son of Clive Staples Lewis hammers on the back of a wardrobe in the writer’s attic, begging to be let into Narnia to escape the grief of his mother’s death. It is a perfect example of how the worlds found in books of all kinds, can provide us with an escape from a sometimes challenging reality. There is nothing wrong with this escape; I think it enriches us and gives us strength with which to return to the mundane world, armed and armoured with the exploits of our favourite characters.

When I was growing up, I was lucky enough to have parents who encouraged me to read, and thus the house had plenty of books to lose myself in. In fact, I still have an early edition of The Lion, The Witch and the Wardrobe tucked safely away, priced at two shillings and sixpence and with Pauline Baynes’ beautiful original artwork on the cover. But it wasn’t the usual suspects that really fired up the need to write something of my own. Sure, I had Narnia and Middle Earth sitting cheek-by-jowl on my bookshelf with Earthsea and the many adventures of Doctor Who, but it was two groups of books in particular that have stuck with me into adulthood and made me want to create my own worlds for children (and adults that haven’t forgotten how to be children) to inhabit.

These books were complex, quite dark in places, and didn’t feel as distant as the more ‘traditional’ fantasy stories. The first is The Dark is Rising sequence by Susan Cooper, and the second is the Gormenghast trilogy by Mervyn Peake. Beginning with Over Sea, Under Stone, Cooper takes the reader into the eternal battle between the light and the dark, weaving in elements of Celtic and Norse mythology. I loved it, and usually take a battered omnibus edition into schools when I do visits. Mervyn Peake’s books are very different, and in Titus Groan we are introduced to the vast, labyrinthine world of Gormenghast castle, filled with the most strangely-named characters you could meet outside of a Dickens novel. From Mr Rottcodd to Doctor Prunesquallor, from Steerpike to Sourdust, you are faced with a cast of grotesques that wouldn’t seem out of place in a Victorian asylum.

In my trilogy, which started with Gabriel’s Clock and now ends with Michael’s Spear, I wanted to recreate the same feeling I had when I first dived in to the worlds crafted by Cooper and Peake. I wanted to have a battle of the light against the dark, but for it not to be clear cut just who is good and who is evil. I also wanted my world to be filled with characters as rich and as bonkers as those in Gormenghast. So I built Hobbes End, a village in the middle of a forest, given sentience and a soul by the crash-landing of an angel; filled with people who have secrets and need somewhere to be safe. From Elgar to Ignatius, from Grimm to Gabriel, from Montgomery to Stubbs, I had my cast of players.

Should I ever wish to visit the place that inspired Hobbes End, I simply drive north of Norwich to the little village of Heydon and sit myself on the green with a thermos of coffee and a sandwich. It is there that I can clamber through my own wardrobe, and it feels like coming home. 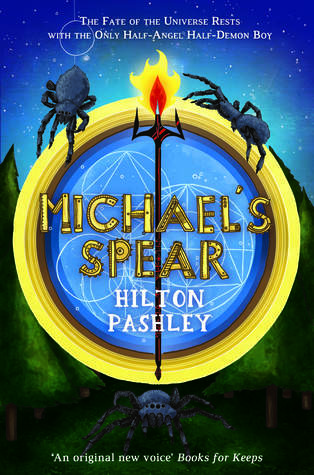 A huge thank you to Emily from The Dome Press for inviting me onto the blog tour! Be sure to check out the other stops throughout the week.